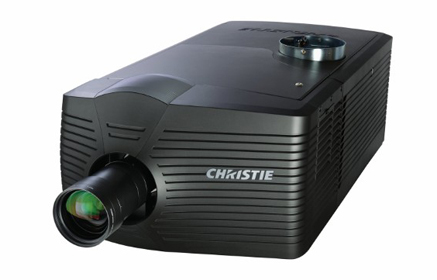 For a quantum leap in image processing, look no further than the Christie Mirage 4K. Delivering the highest DLP resolution on the market today, the Mirage 4K is based on Christie’s unique TruLife electronics, giving you unprecedented image fidelity, life-like vibrant colors and up to 25,000 lumens for the brightest 3D immersive experience. Additionally, you have the added value of Xenon-based illumination, providing the most natural color accuracy, uniformity and stability over time.

Based on Christie’s superior design, engineering and manufacturing, the Mirage 4K product line provides 24/7 reliability, ease of service and consistent performance for years of operation.

At Christie, we help our customers create and share the world’s best visual experiences.

The Christie TruLife electronics platform is a powerful combination of high refresh rates and high resolution, supporting a video processing pipeline of up to 1.2 Gigapixels per second. The result is smooth moving content and stunning image quality.

Christie ArrayLOC manages the brightness and color levels of all projectors within an array to a common level, in real-time with no additional latency. Synchronized color and brightness level balancing self-adjusts in as little as two seconds, reducing the amount of time, labor and costs associated with maintaining a simulation display.

Christie AutoCal calibrates any arrayed projection display, from flat to cylindrical to spherical, and adjusts it to its optimized viewing configuration. With expert image display adjustment capabilities at your fingertips, a stabilized, consistent display with reduced system maintenance and downtime will achieve increased productivity.

With the expertise of Christie AutoCal, arrayed projection displays are easily configured and maintained.

Christie Twist offers enhanced warping and blending for exact geometric mapping regardless of the shape or surface.

Whether using active or passive display technology, the Christie Mirage M Series is easy to setup and configure. The most compact 3-chip DLP active stereo projectors in their class, the Christie Mirage M Series delivers visually stunning 3D for boardrooms, home theater, museums, education, scientific research, virtual prototyping, oil and gas exploration and anything in between.

Offering complete compatibility with today's 3D home entertainment requirements, the Christie Mirage M Series is ready for Blu-ray 3D video, PS3 and other gaming consoles and meets the mandatory 3D spec for HDMI v1.4a. To ensure your 3D solution is complete, Christie also offers a range of accessories that include: 3D glasses (active and passive), emitters and modulators.

For the ultimate home theater including Blu-ray 3D video content, the Christie Mirage M Series uses triple flash to provide the best images possible, no matter how fast motion your content might be. You can count on Christie to ensure the highest image quality and a comfortable theaterlike viewing experience.

When it comes to 3D for a larger crowd, passive stereoscopic displays offer the best return on investment. Using low-cost polarized glasses that can be given away or recycled after a single use, a passive stereo display is a cost effective way to deliver quality 3D images. Combine a silver screen and Christie Mirage M Series projectors with Christie Mirage 3D accessories, including our passive modulator and circular polarized 3D glasses, and you can bring incredible eye-popping 3D to even the largest of audiences! 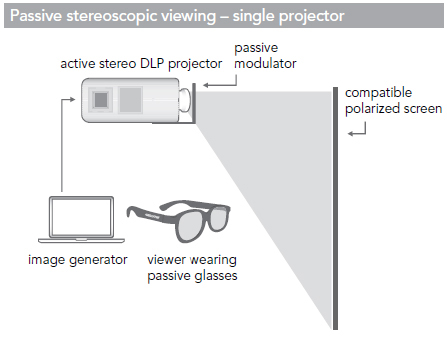 1 Lamp is included, but lamp choice must be specified at the time of order.
2 Also compatible with a variety of 24-60Hz 2D formats.
3 Christie Twist/Twist Pro warp/blend/scale functionality is included in hardware, but not available until new firmware is released in Q1-2014.

What is the Christie Mirage 4K?

The Christie Mirage 4K platform is the world’s first and only 4K DLP projector that can display 2D or 3D , full-frame 4K content at 120Hz.

What type of 3D content does the Mirage 4K support?

What physical input connectors are included with the Mirage 4K?

The Mirage 4K comes with four input card slots and all four slots are populated from the factory. The standard configuration is with four Twin DisplayPort input cards. Each card can accept two DisplayPort 1.1a signals. In addition to the dual input connectors, there are dual loop output connectors for loop-through. These quad DisplayPort cards will support any of the three modes of 3D content described above.

What physical input connectors are included with the Mirage 4K?

The Mirage 4K comes with four input card slots and all four slots are populated from the factory. The standard configuration is with four Twin DisplayPort input cards. Each card can accept two DisplayPort 1.1a signals. In addition to the dual input connectors, there are dual loop output connectors for loop-through. These quad DisplayPort cards will support any of the three modes of 3D content described above.

Yes. The source system must be frame-locked before the signal is sent to the projector. The Mirage 4K uses multiple signals (either four or eight channels) from sources that are delivered to the projector at the same exact time. This synchronization is called "frame lock." This frame lock is accomplished in the computer system or playback server system, via internal or external methods, depending on the source type. Please refer to the source supplier to understand how to configure the source properly to ensure proper frame lock in the source playback system.

What optional cards are compatible with the Mirage 4K?

Optionally, one can remove the four Twin DisplayPort input cards and replace two or four of them with Twin HDMI™ input cards, Dual Link DVI-D input cards or 3G HD-SDI input cards. Please note: if only two cards of any one type are installed, only method 3 (frame doubling) 60Hz (30Hz per eye) content is compatible. Four cards of the same type are required for supporting methods one or two.

DisplayPort is the most advanced, flexible and capable digital interface signal standard established by Video Electronics Standards Association (VESA). The standard size DisplayPort connector features a locking connector and has been designed to ultimately replace the older VGA, DVI and FPD-Link formats. DisplayPort is sometimes referred to as “DP.”

The Mirage 4K comes standard with four DisplayPort 1.1a input cards. Each of the four twin DisplayPort cards also features a pair of output connectors. These outputs can be used to mirror the display content on an external display. Please note: Because the Mirage 4K uses quadrants, only one portion of the content will appear per segment. The Mirage 4K can use either four or eight channels for true 120Hz operation. It can also accept four channels of 60Hz for use at 30Hz per eye.

The frame doubled approach of 120Hz output from 60Hz (30Hz per eye 3D) will support 4:4:4 at eight or ten bit color. Only two cards are required if frame doubling is required. Mini DisplayPort can be adapted to a full-size DisplayPort with an appropriate adaptor.

HDMI is an acronym for High Definition Multimedia interface. The Mirage 4K can accept optional HDMI input cards. Four cards with eight frame-locked channels are needed if true 120Hz (60Hz per eye) is desired via HDMI. Only two cards are needed if the frame doubled approach is used. The color depth is 4:4:4 eight or ten bit and 4:2:2 if eight bit is used.

Each of the four twin DisplayPort cards also features a pair of output connectors. These outputs can be used to mirror the display content on an external display. Please note: Because the Mirage 4K uses quadrants, only one portion of the content will appear per segment.

DVI is an acronym for Digital Video Interface and was the first widely adopted digital signal standard developed in 1999. The Mirage 4K can accept optional DVI-D Dual Link input cards. Four cards must be used if true 120Hz is to be achieved. Eight bit color is supported over DVI-D.

There are several variations of a DVI connector including Single and Dual Link DVI-D, DVI-A, DVI-I. Only DVI-D signals are compatible with the Mirage 4K and Dual Link format must be used if true 120Hz performance is to be achieved with the DVI-D interface.

If there are two inputs on the DisplayPort card, why do I need four cards to support 3D stereo content?

How do I connect my source for method 1 (true 120Hz in/out performance)?

How do I connect my source for method 2 (dual quads of 60Hz left-right content combined for true 120Hz performance)?

The Mirage 4K can support method 2 via eight frame-locked 59.94Hz signals or 60Hz. Each channel must be frame-locked at the source. Each group of four channels is a mono signal of either left-eye or right-eye content. The projector combines (interleaves) them to make a full 120Hz 4K image.

Can you connect a Christie Spyder X20 to a Mirage 4K with full 120Hz 3D support?

The Christie Spyder X20 with the Spyder stereoscopic option (SSO) option is compatible to drive the Mirage 4K if the optional four Dual Link DVI-D input cards are installed.

Can I upgrade to a Mirage 4K from a 60Hz D4K projector?

Yes. For an additional fee, there will be a method to upgrade a 60Hz D4K projector to Mirage 4K specifications.

No. There is no upgrade path from a 24/30Hz D4K projector to Mirage 4K specifications.

What resolutions are compatible with the Mirage 4K?

Does the Mirage 4K support the Christie Twist?

The hardware to fully support Christie Twist functionality (warping, blending, scaling etc.) is included with the product. However, the firmware to enable the functionality will not be available until the end of 2013. This firmware will be a free update as soon as it is available.

Is the Mirage 4K HDCP-compliant?

Yes. The Mirage 4K is HDCP-compliant.

At this point, 3D Blu-ray DVD content is not compatible. However, after Christie Twist is available and scaling is enabled, compatible single-channel sources, including Blu-ray DVD, will be supported.

There is no current direct support for analog signals.

Yes. The Mirage 4K will support the same connections that the Christie D4K 60Hz platform does. However, there will be limitations on supporting 3D content that can be shown via method 1 or 2 unless the projector has four identical input cards.

No. There is no support for encrypted DCI content.

What 3D sources are compatible with mode 1 or 2?

What 3D sources are compatible with mode 3?